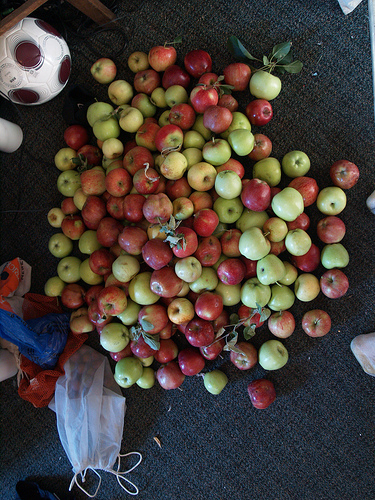 For some time, I’ve been trying to figure out why people don’t eat apple cores. They taste just as good as the rest of the apple if a little chewier. Really, you can eat the whole damn thing except the stem (sometimes I get excited and eat it too). I’ve also been taking a secret poll of my friends to see who also eats cores. It’s only a few (less than 5 by my count). But those few get mad-props in my mind. Eating apple cores indicates a certain cultural flexibility and rejection of assumed norms with respect to food. It also shows that you really really enjoy a good apple and that’s an indicator of serious inward goodness and balance in some sort of goofy food-centric mental-health world-view. Maybe there are more, but mostly I observe people toss the cores or (if I’m around) hand them to me to eat.

Last month, while hanging out in Portland and picking and devouring “too buggy to sell” Honeycrisp apples (an amazing burden to have) I had a revelation. Here’s what I think: prior to pesticides and large scale industrialization of farming, apples were more similar to what you get if you walk down the street and pick an apple off the tree and bite into it. Some percentage of these “real” apples have bugs (as Michael Pollan would say: it’s good to see other critters taking interest in your food). The majority of bugs seem to live in the core. Hence, a good fraction of these apples, you have to throw out the core. This isn’t true of apples you buy from your local supermarket or farmers’ market. These apples come from carefully farmed and sprayed trees. They don’t have bugs. Even if you buy “organic” or “local” apples, you only see the creme de la creme for sale and those are the non-buggy ones. So, you can safely eat the core. Exciting theory, no? Well, it excites me anyway, because we basically have an entire nation of people throwing out otherwise fine food because we have this cultural aspect of food which tells us that you aren’t “supposed” to eat an apple core. But, this societal apple core more (that’s the 5th OED sense of “more”) is outdated. Antiquated. Useless. Behind the times. Your apple cores are safe, people! Eat them. You won’t regret it.

It’s harvesting time here in Colorado—both regionally and right in my neighborhood. I’ve been picking and canning fruit and food like a madman in preparation for the winter (or the apocalypse, apparently). I’ve registered the domain FallingFruit.org, which serves as a front-end to area maps of local “urban edibles” (this is a fork from UrbanEdibles.org). I’ve mostly been canning peaches and apples. This Friday, Hana and I picked about 2 bushels of apples and made apple sauce. 14 quarts of apple sauce and there are still enough apples leftover for cellaring (apples keep all winter if kept at the right temperature) and making pies. I also caught the tail end of peach season and canned up a bunch of “bourbon vanilla peach preserves”. It didn’t quite turn out as good as previous years (I blame the pectin I used and my inclination to stray from the recipe), but is still pretty tasty. I’ve also been canning other things. I piled up about 3/4 of my canned food stock the other day and set it out to take photos, which are in my photostream. I’m simultaneously proud and embarrassed about my obsessive stock. I honestly don’t have enough space in my house for all my canned goods and must keep some at my work and some in my closet. I think I need to build a storage system or something. 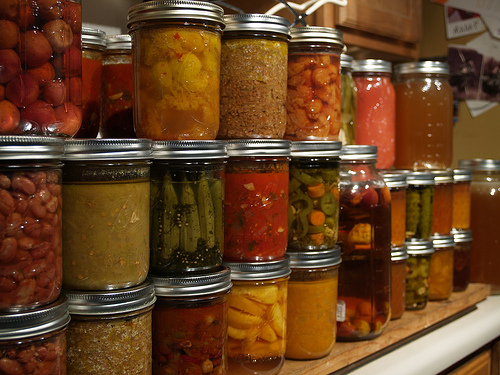 In other news, I’m back in Colorado and have been settling back into work and school. Two weeks ago I spent a little time in the Canadian Rockies where I met up with Becky and attended the International Conference on Nonlinear Dynamics (ICAND’10). I was there presenting my work on using computers to assist in setting climbing routes, which I call Strange Beta. While up there we did some driving around and a bunch of trail running and some hiking. The aspens were turning and the peaks snow-frosted. It was absolutely gorgeous. The conference went very well and it was great to see Becky after more than 3 months apart. She wrote some stuff about the trip and took some photos.

This semester, I’m working in Boulder Highschool where I’m helping with some social studies classes. Besides this, I’m working on my thesis research, auditing one class, functioning as the department social chair, and sitting on department’s decision making graduate committee. I’m also training a bunch, working on my cycling and running mostly and taking a bit of a break from climbing.